Cats In Our Care

Cats In Our Care

This page is to showcase the cats in our care who for various reasons are not available for adoption. Some are long term fosters due to medical issues and some are still on their journey to be ready for a forever home.

As a small charity with limited resources a couple of stray colonies can completely fill us up, have a look below at some of colony cats we currently have with us.

The most nervous, semi-feral cats that come to us start their journey in Feral Towers. Feral Towers is a very quiet & calm environment where the cats see the same people and are allowed to settle in their own time. The aim of Feral Towers is for the cats to get used to people and once they are confident be moved to our main pens to get more dedicated socialisation. As well as the Radford colony below these are our other FT residents.

The Radford colony was an emergency situation, these cats and kittens were being attacked by dogs, killed on the road and people were deliberately trying to harm them. The colony was mainly mums and kittens, most have already found new homes, but these sweethearts are still on their journey. 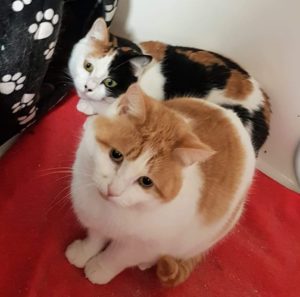 Etna & Mollie, we believe Etna (calico) is the matriarch of the colony and all of the cats in the colony originated with her, she is sweet but very nervous, her daughter Mollie is less so. Although they are both still learning to trust, they have made real progress so far. 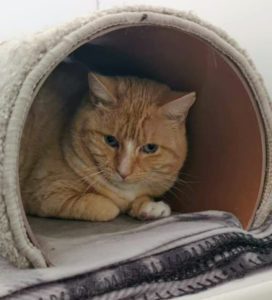 Gentle boy Luca, is the most nervous of the group, but he is getting used to people and definitely likes the regular supply of food! He now lives with Georgia as they made it obvious they were meant to be together. 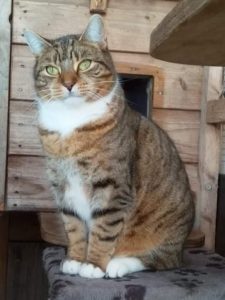 Georgia was found at industrial site with her kitten and was already heavily pregnant again. She had her kittens in a foster home and they were all successfully re homed. Georgia doesn’t really like people but loves being in Feral Towers, especially in the run where she likes to lounge on the tree stump. She is making progress and no longer lunges at people, she is on her way. She now lives with Luca as they made it obvious they were meant to be together. 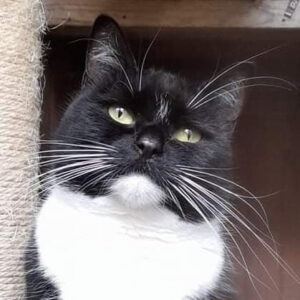 Malika was reported to us by a member of the public, she was living in a greenhouse with her three young kittens, she is still a feisty girl and will only eat the best food but we definitely think she deserves it! 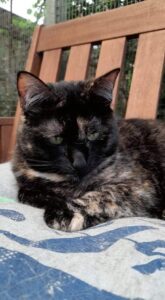 Charon is mum to the Planets, she was found living in awful conditions with her kittens all of which have congenital defects and would not have survived outdoors had they not come into care. She is slowly making progress and is such a pretty girl. 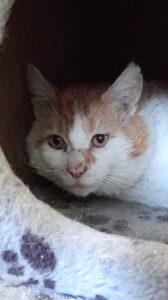 Beowulf was hanging around a nursery site and was unneutered and very battered when he came in. This gorgeous boy is Fiv postitive due to the hard fighting life he’s had. Despite this, he is truly a sweet boy and will make someone a fantastic companion in the not too distant future.

The cats below are either in foster care or at our centre, they will never be re homed due to medical or other issues. 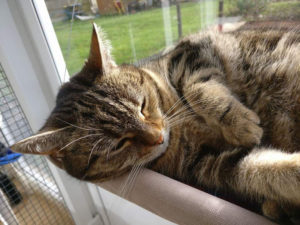 Princess Emily as she likes to be known lives long term at our centre as she does not react well in a home environment and reverts to feral behaviour. After three homing attempts we realised Princess Em was far happier being adored and worshipped at the centre. 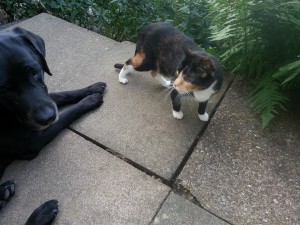 Lovely Lottie was born in our care and it soon became clear that she was not a ‘normal’ kitten, Lottie suffers from Cerebellar Hypoplasia also known as wobbly cat syndrome. This is a neurological condition that affects movement. Due to this we decided she was best to stay in her foster home  where she could get the best care. She has been in her home for eight years now, and is most definitely part of the family. 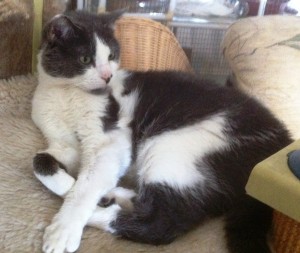 The lovely Friday so called as he was found straying around TGI Friday’s in Binley. Friday is a gorgeous big cat, friendly and fussy, but unable to be homed as he sometimes suffers from sleep incontinence. He has been living happily with a long-term foster carer for the last seven years.

If you would like to help us continue to care for our cats, you can make a Paypal donation from our shop.  Donate & Shop

You can also sponsor some of our longer term residents here

Thank you for your support, helping us to help the stray and feral cats of Coventry, we couldn’t do it without you!