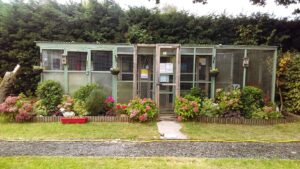 Feral Cat: A cat born in the wild and never handled, living on their own or in a colony

Our Feral work is time consuming but very rewarding! See our Feral FAQs below for more information.

We aim to trap feral cats (as far as time, resources and money allows), take them to a vet for a check up, give them any necessary vaccinations and then neuter (males) or spay (females) the cats, then after their recovery period in our feral pens we either return them if there is a caregiver willing to provide food & shelter OR find an alternative domestic home.

What Is a Feral Cat? A cat born and raised in the wild, or who has been abandoned or lost and turned to wild ways in order to survive, is considered a free—roaming or feral cat. While some feral cats tolerate a bit of human contact, most are too fearful and wild to be handled. Ferals often live in groups, called colonies, and take refuge wherever they can find food—rodents and other small animals and garbage. They will also try to seek out abandoned buildings or deserted cars—or even dig holes in the ground—to keep warm in winter months and cool during the summer heat.

Simply put, it’s not easy. Feral cats must endure weather extremes such as cold and snow, heat and rain. They also face starvation, infection and attacks by other animals. Unfortunately, almost half of the kittens born outdoors die from disease, exposure or parasites before their first year. Feral cats also face eradication by humans—poison, trapping, gassing and steel leg-hold traps are dangers to feral cats. That said, feral cats who live in a managed colony—a colony with a dedicated caretaker who provides regular feedings and proper shelter—can live happily together.

What Is the Average Lifespan of a Feral Cat?

If a feral cat survives kittenhood, his average lifespan is likely to be less than two years if living on his own. If a cat is lucky enough to be in a colony that has a caretaker, he may reach 10 years.

Is There a Difference Between a Stray Cat and a Feral Cat?

Yes. A feral cat is primarily wild-raised or has adapted to feral life, while we define a stray cat as someone’s pet who has become lost or has been abandoned. Stray cats are usually tame and comfortable around people. They will frequently rub against legs and exhibit behaviours such as purring and meowing. In contrast, feral cats are notably quiet and keep their distance. Stray cats will also often try to make a home near humans—in car garages, front porches or backyards. Most are completely reliant on humans as a food source and are not yet able to cope with life on the streets.

What Is Trap-Neuter-Return (TNR)?

TNR is the method of humanely trapping feral cats, having them spayed or neutered and vaccinated against rabies, and then returning them to a safe place (farm, stables, rural home..) to live out their lives with someone who provides food and adequate shelter and monitors the cats’ health. TNR has been shown to be the least costly, as well as the most efficient and humane way of stabilising feral cat populations and it is part of our work here at Coventry Cat Group. One thing to be aware of though is that if you remove the cats from a site, it is likely that new feral cats will move in and claim that territory, so a stable neutered colony will be not only healthier for the cats but provide a more effective working population.

How Does TNR Help Feral Cats?

Through TNR, feral cats can live out their lives without adding to the homeless cat population. Furthermore, by stabilising the population, cats will naturally have more space, shelter and food, and fewer risks of disease. After being spayed or neutered, cats living in colonies tend to gain weight and live healthier lives. Spayed cats are less likely to develop breast cancer and will not be at risk for ovarian or uterine cancer, while neutered males will not get testicular cancer. By neutering male cats, you also reduce the risk of injury and infection, since intact males have a natural instinct to fight with other cats. Spaying also means female cats do not go into heat. That means they attract fewer tom cats to the area, reducing fighting. If cats are sterilised and live in a colony that has a caretaker, they may live more than 10 years. TNR also helps the community by reducing the number of kittens that would end up in their already overfull rescue shelters.

Can I Tame a Feral Cat?

While a feral cat might look exactly the same as a pet cat, they’re actually very different. Feral cats survive by avoiding close human interaction. When properly cared for, feral cats are happier outdoors in their own territory—they have their own hierarchies and are able to exhibit their natural behaviours. However, older feral cats can sometimes become friendly with the feeders and if allowed in to a house, will become part of the household. They will always be nervous but can often form strong bonds with the feeder.

What about Feral Kittens?

The mortality rate of Feral Kittens born outdoors is sadly very high. We do have great success with trapping, fostering and socialising feral kittens who are young enough to be able to learn to trust and interact with humans, and then finding ‘forever homes’ for them. We have specialised foster carers who are experienced in this work, and we look for adopters who will have a lot of patience as their shy kitten grows in confidence.